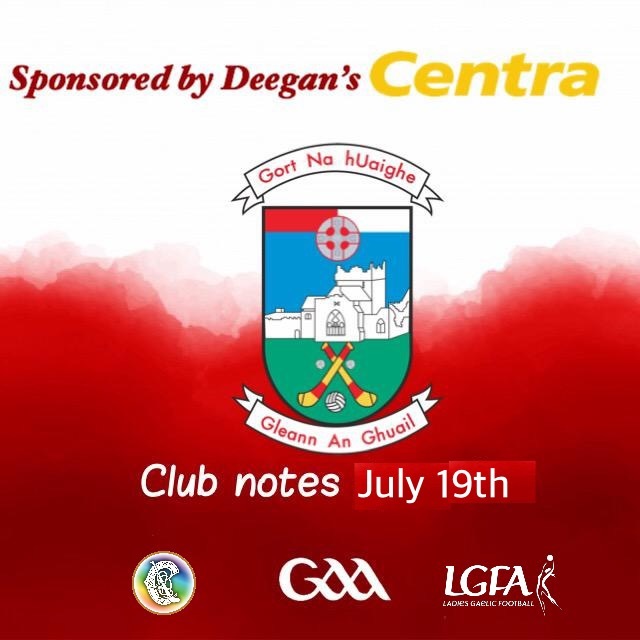 Our Drive in Bingo continued last Saturday night with another big crowd in attendance. We will be going again next Saturday at 6pm in the GAA Grounds. Gates open from 4.30pm.

Congrats to Lorcan Bourke, Aaron Dwyer and Declan Teehan on making the mid u14 hurling panel.

Our Junior hurlers were knocked out at the semi final stage in the Junior League last Friday night away to Upperchurch Drombane on a 5-20 to 2–13 score line. Attention now turns to the Mid Championship in a months time

Our Ladies football team took on Rockvale Rovers away in Newport last Sunday in Round 2 of the league. The girls came away with the points in a comprehensive win

Training for these groups continues every Saturday at 9:30am

U11 had no game this weekend. They play upperchurch in football Saturday 24th at 12 in drombane.

U13 hurlers played Urlingford in a challenge on Saturday and will continue training during the week.

Our U15s had a well earned draw against Loughmore in Castleiney on Thursday evening last. Both teams are now on the same points and must do it all again. The winners will take up the last mid semi final spot.

U17 hurlers had a good win against Grangemockler/Ballyneale last monday. They play Knockavilla Kickhams mon 19th in Dundrum.

Both teams played again this week. Last Mon evening in the community field, the Red team fought hard against a very skilled Boherlahan team who proved the stronger team in the end. The White team had a great win against Nenagh on Thursday evening last hosted by Eire Og. The U12's are out again this week with a match against the Silvermines on Mon eve in Gortnahoe at 8pm and away to Fethard on Tuesday evening at 7.30pm. The girls are showing fantastic teamwork, improved skills and determination this year and we wish them the best of luck with all their matches this summer.

U14 - The girls played St Pats in a very tough and challenging game. Unfortunately St Pats were the stronger team on the day. Best of luck to the girls who play Templemore in championship this week.

U16 - Congratulations to the u16 who had a great win against Ballingarry in the first round of the Championship. The girls play Carrick Swans in Carrick @ 7.30pm on Monday. Best of luck to all involved.

A massive congratulations to Ciara Gleeson and Amy Redden who made the u15 Tipperary panel who played Waterford last week. Also well done to Helen Cleere who played with the U16A Tipperary Camogie Panel vs Kilkenny last week. It is fantastic to see Gortnahoe Glengoole camogie being represented at county level. Well done to the girls from all at Gortnahoe-Glengoole Camogie.

Junior - The girls were meant to play St Cronans in 3rd round of league but is rescheduled now for later in the month. The girls play Lorrha at home @ 8pm Saturday 24th of July in 4th round of league. Best of luck to all involved.

Our Senior hurlers had a well earned break this week after a heavy schedule of games, preparations are well under way for the start of the championship in September

Gortnahoe Glengoole GAA Club would like to offer our cond...

Well done to Ciara Gleeson who was selected for the Tippe...

Gortnahoe Glengoole GAA Club would like to offer its cond...

Best of luck to Nigel &amp; Gail Cooke who are opening a ...